Today, on 13.04.2021, the Munich City Council is discussing about 14 different TSB routing variations to connect Munich with the surrounding area.

The picture from the tweet shows that there are a total of 14 route proposals.

Apparently, one of the plans is to build TSB routes as tunnels. It can also be seen from the tweet that ground-level and elevated tracks are also planned.

We expect more detailed information shortly, this is just a short message.
Top

Do you know, what EBP is? Is that a consulting company?
In my opinion, Max Bögl just want to sell their TSB. It does't matter for them, if it is useful or not. They need a demonstration project.
Member of The International Maglevboard e.V.
Top

The district of Munich has commissioned the Swiss engineering firm EBP to study several routes for a maglev train, the "Bögl transport system". The trains, which can travel at speeds of up to 150 kilometers per hour, run automatically without a train driver and could either open up new areas or create tangential connections. The costs and benefits of 14 routes were analyzed.

The results showed that the Böglbahn could strengthen local public transportation and thus relieve the streets of car traffic - if it were used as the main means of transportation and opened up areas that have been comparatively poorly connected to the S-Bahn and U-Bahn systems up to now. Corridors in the north along the U2/U3 (from Feldmoching and Moosach in the direction of Dachau) and the U6 (from Garching-Hochbrück to Unterschleißheim) as well as a long tangential connection in the northeast (from Unterschleißheim to Garching, Unterföhring, Riem and Haar) in particular show potential and are now to be studied in greater depth.

Media coverage of the TSB in Munich, on 14.04.2021: photos of vending machines for newspapers. 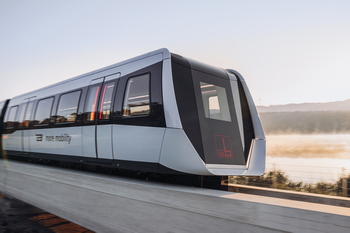 Munich: Increasing traffic pressure, the growing metropolitan area: new challenges require new solutions. Together with the state capital of Munich, several MVV-associated districts and the Munich Transport Company (MVG), the Munich Transport and Tariff Association (MVV) accompanied a traffic study on the basic traffic sense of the Transport System Bögl (TSB) - a maglev train. For corridors in the south, east and north of Munich, as well as between Dachau and Munich in the northwest, the study shows that a basic economic benefit can be assumed. The results of the study were presented [...] in the transport committee of the Munich district.

With the Transport System Bögl (TSB), the Max Bögl Group has developed a maglev train as a complete system solution for use in local public transport. Over the past ten years, the vehicles, the infrastructure and the operations control technology have been developed to production readiness. Various committees and delegations from the MVV region have already visited the company's headquarters in Sengenthal in the Upper Palatinate and had the system presented to them. The initial rough study now available has made it possible to identify the transport system's basic feasibility in terms of traffic for various potential application routes in the Munich metropolitan area.

The aim of the traffic study, which was carried out by a Swiss engineering firm, was to make an initial rough traffic value assessment of the TSB in order to be able to identify in principle whether this new transport system could be promising for the Munich area. In the process, initial benefit-cost calculations were also prepared for various routes, which were intended to show indications of possible government funding. Specifically, for four different corridors in the MVV area, it was examined on which routes or in which spatial and traffic environment the Bögl transport system could achieve a traffic benefit and economic viability.

The first traffic value assessment that has now been carried out shows indications that the TSB could meaningfully strengthen local public transport in various corridors ("North U2/U3" (Dachau - Karlsfeld - Munich), "North U6" (Garching - Hochbrück - Unterschleißheim), "South U5" (Taufkirchen/Ottobrunn - Neubiberg - Munich) and "East U2" (Nordosttangente)). According to the assessment, the Bögl transport system could achieve a large share of passengers switching from cars to public transport if it opens up new areas and acts as the main means of public transport. However, more in-depth studies are needed to make a final assessment.

"The population figures in the Munich region are rising steadily, and there is no relief in sight on the roads in the long term - despite the current pandemic situation. The expansion of the transport infrastructure is one of the most urgent tasks in Munich County. Only with a mix of different measures and means of transport can we tackle the traffic problems in a targeted manner. The present study shows that the TSB could be a very promising transport system. However, whether it could really be a meaningful addition to local public transport in the Munich district would first have to be subjected to an objective and comparative examination, which would confirm the traffic benefits as a first step. In further steps, urban planning aspects would also have to be examined," says Christoph Göbel, District Administrator of the Munich district.

Dachau's District Administrator Stefan Löwl sees the results of the study as confirming the potential for the feasibility of the TSB in the north of Munich: "The positive benefit-cost ratio for the possible connection between Feldmoching and Dachau, as well as other corridors studied, shows that with the TSB there is a new solution option for the future of public transport services in and around Munich "made in Bavaria". Especially in view of the enormous competition for space, the use of the so-called "third" level could represent a relevant advantage for the TSB. I would be pleased if we could realize this project together in the north of Munich."

The Mobility Officer of the City of Munich, Georg Dunkel, considers the TSB to be a meaningful instrument for the further implementation of the traffic turnaround: "Particularly in the outskirts, I can very well imagine the TSB as a supplement to the streetcar, subway or S-Bahn. Particularly in the corridor from Dachau to the north of Munich, we urgently need an additional public transport service, and this is where the TSB could play to its strengths. However, there are still a number of questions to be answered, especially with regard to linking it with the existing network."

"The TSB is a fundamentally interesting new transport system, and the study currently available attests to its rough feasibility," said MVV Managing Director Dr. Bernd Rosenbusch. "Other crucial issues, such as the system's urban integration, land availability, or even transfer times and costs, still need to be examined in greater depth in a next step."

The TSB is a new public transport system that has so far only been tested on a demonstration line in China and a trial line in Bavaria. In the summer of 2020, the German Federal Railway Authority (EBA) confirmed that major parts of the vehicle and guideway are ready for approval.

In a next step, a comparison with classic transportation systems such as streetcars, subways, and possibly cable cars would now be meaningful in order to find the best development option for the favored corridors. In individual cases, this could also mean a combination of different transport systems. A general comparison of the TSB with conventional public transport systems is currently being carried out in a feasibility study by the German Federal Ministry of Transport and will be examined in more detail using Munich Airport as an application example. Initial findings are expected to be available in spring 2021 and can be incorporated into further considerations of the corridors.

Munich rejected the Transrapid, so why should Munich now choose the TSB?
Sometimes active on Twitter, but not regularly.
https://twitter.com/Eurorapid
...
Top

Anyone listening to this argument could hardly believe that the duelists were party colleagues: Ottobrunn Mayor Thomas Loderer and District Administrator Christoph Göbel, both CSU, engaged in a fierce exchange of blows at the recent meeting of the district transportation committee in Unterschleißheim. The topic was the traffic development of the Ludwig-Bölkow-Campus, where a faculty for aerospace of the Technical University of Munich (TUM) is currently being built. There will be 30 professorships, and up to 4,000 students are expected to complete their academic training there.

Loderer cannot understand why the studies should also examine the feasibility and profitability of a magnetic levitation train (Transport System Bögl) and the trolley buses preferred by the district administrator.

As for Transport System Bögl (TSB), a cost-benefit study of such a maglev train is to be examined, using the same methodology already practiced for the U-5 extension study, to make the results more comparable.
English summary of a German language report in Süddeutsche Zeitung: https://www.sueddeutsche.de/muenchen/la ... -1.5340585 Accessed: 2021-07-06
Sometimes active on Twitter, but not regularly.
https://twitter.com/Eurorapid
...
Top

For two years, Federal Transport Minister Andreas Scheuer (47, CSU) had the "Bögl Transport System" studied. The results of the feasibility study are now available. A 7.5-kilometer potential route at the airport was studied.

► For two tracks, where trains could run in opposite directions, construction costs would be 313.1 million euros. Annual operating costs: 3.8 million.

The monorail could connect the parking garages and S-Bahn stations with the terminal buildings.

Scheuer would have the system included in the Municipal Finance Act. However, he can no longer do that. Scheuer's last day as transportation minister is Wednesday, Dec. 8, 2021. His successor Volker Wissing (51, FDP) would have to do the job.

Translation of the official statement of the German Transport Ministry.

In February 2020, the German Federal Ministry of Transport and Digital Infrastructure (BMVI) commissioned a feasibility study on the use of new mass transit technology. The study focused on the Transport System Bögl (TSB), a new type of maglev system whose main application is in mass transit.

"The results of our feasibility study prove: the maglev train can rival classic rail systems, especially on highly frequented routes. This makes it a real alternative for Munich Airport as well. My proposal: include the technology in the Municipal Transportation Financing Act so that the federal government can promote its use in mass transit".

In order to be able to assess and evaluate the novel system, the study compared it with the classic track-based mass transit systems of Tramways, U-Bahn and S-Bahn. In the second part of this study, the feasibility of using the TSB in a specific application was investigated using Munich Airport as an example.

According to the results of the feasibility study, the TSB shows itself to be a competitive alternative to classic track-guided transport systems. This provides a further innovative and climate-friendly means of transport to meet the growing mobility requirements, particularly in local traffic.

The TSB is ideally suited for high-capacity commuter rail services with comparable costs and a high degree of operational flexibility to adapt to demand. In addition, the TSB has an advantage over the other systems, especially under difficult topographical conditions.

Using Munich Airport as an example, the study confirms that TSB can be a competitive alternative to other possible transportation systems and can be directly linked to the regional mass transit network.

The study provides important fundamentals and results that can serve as a decision-making aid for a system decision.