Shizuoka Prefecture is concerned that the water balance in the important Oi River will be severely disrupted by the construction of the tunnel for the Japanese high-speed Maglev system. The river is of considerable importance for the drinking water supply of some 600,000 people in the prefecture and is also important for the region's paper industry, which has a high demand for water. The prefecture is demanding the detour and complete return to the Oi River of all water that could be affected by the tunnel.

One of the reasons why the prefectural government and water users have demanded that JR Tokai guarantees to return the entire volume of water (from the tunnel construction is that JR Tokai has been claiming that there will be no impact from the construction of the linear railway line. JR Tokai has made several predictionsregarding the issue that seem insufficient from a scientific point of view. They lacked prior studies of geology, river flow, groundwater levels, and precipitation. It seems difficult to predict the extent of the impact when data is insufficient. The prefectural government has therefore demanded that all relevant data be researched and made available before a decision is made on tunnel construction ...

The conflict plays out against the backdrop of years of conflict of a fundamental nature between the prefecture and JR Tokai. The prefecture has long considered itself disadvantaged by JR Tokai, especially with regard to the connection of the prefectural airport and the city of Shizuoka by conventional Shinkansen trains. The bitterness in the prefecture about the plans and decisions of JR Tokai seems to be great.

While the prefectural government has consistently demanded the return of all water from the tunnel in order to avoid the impact of the construction work on the middle and lower reaches of the river, the Central Japan Railway Company has stepped up its insistence that the impact can be avoided. Without the prefecture's approval, JR Tokai will not be able to realize the tunnel for a long time. This is already delaying the entire line construction and the start of operations by years. 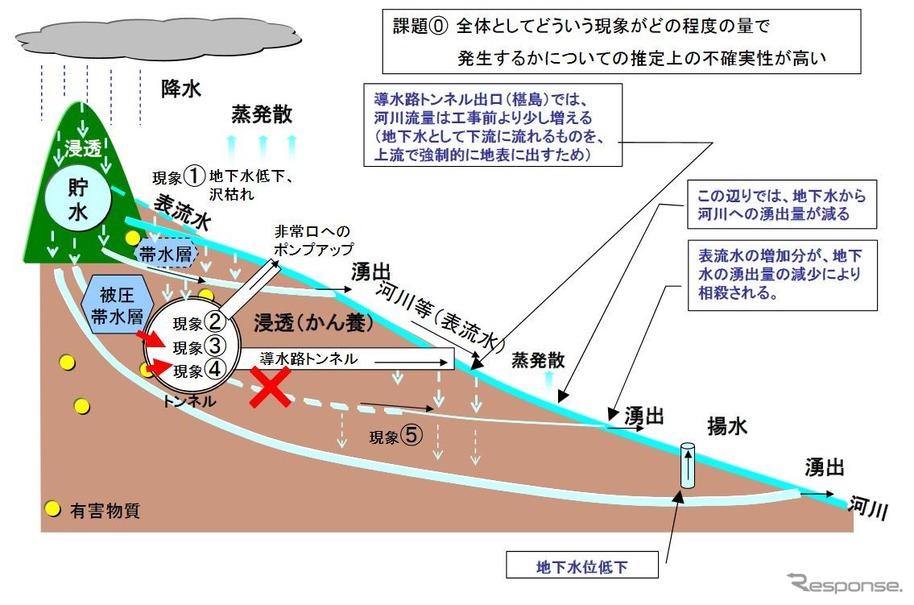 The solution (in my opinion) will be a compromise that will require significant concessions from JR Tokai, including possibly a Maglev station in the prefecture (not planned so far), elaborate water return lines, and Nozomi Shinkansen stops in Shizuoka city.

For those who are interested in the overall context in more detail: Here is a link to a publication of the IMB on this topic:

Did the Department improperly alter the documentation of meetings?

Did the Ministry of Land, Infrastructure, Transport and Tourism improperly alter the documentation of meetings?

Did the Ministry of Land, Infrastructure, Transport and Tourism (MLIT) add text to the documentation of an expert meeting on the construction of the Shinkansen Central Line in Shizuoka Prefecture that was not actually said?

In an interview with the MLIT, it seems that in the documentation of the 9th meeting held in February this year, some words were added that were not actually said, such as "I think it is time to prepare and publish an interim summary" and "I strongly believe that it is necessary to summarize the results from a scientific and technical point of view." However, the MLIT claims rather the opposite: that some of what was actually said was deleted.

The Ministry of Land, Infrastructure, Transport and Tourism is quoted as saying, "We followed the corrections made by the committee members when we circulated the draft minutes" and "In the past, we have made additions and corrections to the minutes to make them easier to understand in written form, as long as the purpose of what was said remains unchanged, and we believe it is within the scope of such corrections this time as well."

From the perspective of a domocratic form of government, it seems surprising that the results were changed. Any addition to the protocols is questionable. Behind the scenes, there seems to be going on a struggle for interpretive sovereignty ...
Best regards,
jok
Top


Shizuoka Prefecture has recently renewed its website with information on the problem of reduced flow of the Oi River due to the construction of the Central Linear Shinkansen Line. In addition to releasing a new video explaining the geological structure of the Minami-Alps, [...] the site has been strengthened by organizing the status of the prefectural and national expert meetings.

At the beginning of the website, the reason for the prolonged delay in resolving the issue is stated: "The dialogue is taking a long time because it is difficult for JR Tokai to submit data as a basis for dialogue. The Ministry of Land, Infrastructure, Transport and Tourism (MLIT) clearly stated the position of the expert panel: "The MLIT, feeling threatened by the speed of progress in the dialogue, established the panel to provide guidance to JR.

[...]
The website was redesigned after the prefectural assembly pointed out the need to strengthen the dissemination of information. Yasuhiro Oribe, director of the prefectural government's Life and Environment Department, stressed, "Through this site, we hope to convey the prefecture's position, which is often misunderstood, in an easy-to-understand manner to people in and outside the prefecture.

Citizens' group in Kakegawa signs petition of 3,650 people to the governor to "not allow the start of construction"

On April 7, a citizens' group called "Ogasa-Kakegawa Association for Protecting the Water and Nature of the Oigawa River from Linear," headed by Katsuyuki Sano, submitted 3,650 signatures to Governor Heita Kawakatsu, urging him not to approve the start of construction of the Shizuoka section of the Minami-Alps Tunnel for the Central Linear Railway.

According to the citizens' group, there are about 80 members. Most of the water used for domestic, agricultural and industrial purposes in the Ogasa and Kakegawa areas, including Kakegawa City and Kikugawa City, comes from the Oi river.

Credibility problem of the MLIT?

The following text is a summary of key statements from a Japanese text in the Nikkan Sports Shimbun.
https://www.nikkansports.com/general/co ... 00087.html
Accessed: 2021-04-09

The Ministry of Land, Infrastructure, Transport and Tourism (MLIT) is suspected to have been in agreement with JR Tokai from the beginning. The problem this time was the exchange of opinions on how to summarize the interim report at the 9th meeting (February 28). It was found that the minutes were not prepared as stated, and some parts were added or deleted after the fact. This means that all of the policies set forth by the ministry have failed.

From the beginning, there were strong protests from the media and the prefecture that the comments made by the chairperson of the expert panel, Shoji Fukuoka (Professor at Chuo University's Research and Development Organization), after the meeting, did not reflect the content of the meeting.

Heita Kawakatsu, the governor of Shizuoka Prefecture, criticized the earlier meeting on March 23, saying, that the meetings follow JR Tokai's documents and lacks neutrality. He also said that the chairperson's comments were compiled outside the meeting in an undisclosed location and called for the chairperson to be replaced.

Governor and others criticize Chairman of Expert panel: The Chairman's talk "is a waste of time":

The Ministry of Land, Infrastructure, Transport and Tourism's expert panel (chaired by Fukuoka Shouji, a professor at Chuo University's Research and Development Organization) has issued a written statement summarizing its discussions on the construction of the Shizuoka section of the Minami-Alps Tunnel for the Central Linear Shinkansen (Maglev). Shizuoka prefectural Governor Kawakatsu Heita and the chiefs of the Oigawa River basin are opposing the statement and have argued that the statement is unnecessary.
The Shizuoka prefectural government is also calling for an improvement in the method of producing the report privately after the meeting.

The Ministry of Land, Infrastructure, Transport and Tourism's Railway Bureau, the secretariat, insists that the chairman's report is indispensable.

Shizuoka Prefecture has strongly criticized the Ministry of Land, Infrastructure, Transport and Tourism (MLIT) for recording in the minutes of a national expert meeting to discuss water issues in the construction of the Central Linear Railway.

Governor Kawakatsu is quoted as saying: "The chairperson's comments seem to reflect the intentions of the secretariat. We were astonished to learn of this.
According to the prefectural government, in the minutes of the ninth meeting of the expert panel held in February 2021, the chairperson of the panel made comments such as, "I think it is time for the expert panel to reflect the results of its discussions and issue an interim report," but no such comments were actually made.
The prefectural government has called for full disclosure of the experts' meeting, but the official said, "The minutes are meant to summarize what was said in an easy-to-understand manner, but they go beyond the scope of not changing the purpose of the meeting, giving the impression that the discussion was exhaustive. It gives the impression that the discussion has been exhausted. Transparency has not been ensured," he said, strongly criticizing the MLIT. 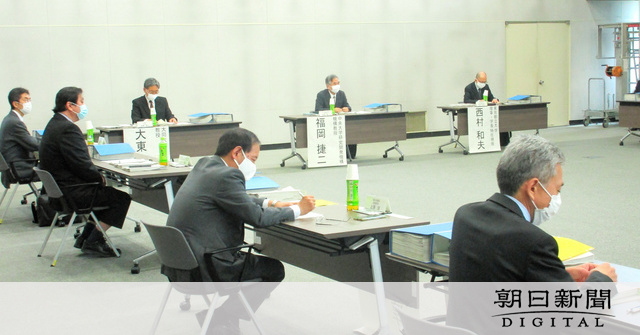 The Ministry of Land, Infrastructure, Transport and Tourism (MLIT) held a meeting of experts at the ministry on April 17 [...]. The government presented a revised draft interim report based on the content of the previous meeting.

The meeting mainly discussed efforts to avoid or reduce the impact on the use of water resources. [...]

The total amount of water inflow that may occur as a result of the tunnel excavation was estimated based on the example of the Seikan Tunnel.
[...]

Vice Governor Namba is reported as saying: "I would like you to stop using models for analysis. I can't help but have a sense of distrust.