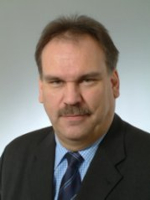 Dipl.-Ing. Karl-Hartmut Blesik passed away unexpectedly on November 8, 2006. He was one of the founders of the former German "Magnetbahnforum".

He was an highly respected engineer and, especially in the restructuring areas of eastern Germany after the reunification, made a name for himself as a realistic thinker with vision, great willpower and drive. The people, especially in the Dresden region, owe a great deal to his personal, tireless commitment.

Karl-Hartmut Blesik was also particularly committed to the Transrapid transport system. He was keen to discuss and support sensible applications and areas of use for maglev technologies. At the same time, however, he was always a critical observer of developments, emphasizing the potential of conventional wheel-rail systems wherever this was still objectively appropriate.

His view of technologies was shaped by questions about the impact and meaning of their application. Questions of long-term benefit to society were always at the center of his thinking.

He did not allow himself to be taken in by one-sided interest groups and did not shy away from necessary conflicts. He was an independent expert whose life's work deserves high recognition.