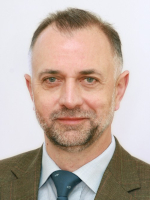 Prof. D.Sc. Ph.D. Eng. Ryszard Pałka is the head of the Department of Power Systems and Electrical Drives, Faculty of Electrical Engineering, at the West Pomeranian University of Technology, Szczecin, Poland.

Vice-President of the Societas Humboldtiana Polonorum; since 2016

Member of the Scientific Council of the Electrotechnical Institute, Warsaw, Poland, since 2017

Member of the Committee on Electrical Engineering, Polish Academy of Sciences