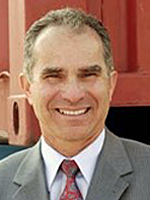 Dr. Sam Gurol is an engineer and president of the consulting company Levet8.

1998 – 2016, General Atomics (GA):  Prior to becoming a consultant in 2017, Dr. Gurol was Director of Transportation Programs at GA, where he led maglev and linear motor transportation programs and oversaw development of the world’s first permanent magnet maglev system, including construction of a full-scale 120-m test track.  He was manager and analyst for the Holloman Air Force rocket maglev project using superconducting electrodynamic levitation; this system achieved a maximum speed of over 1,000 km/h over a track length of 0.64 km in 2016. He participated in the high-speed maglev project using the Transrapid technology connecting Las Vegas and Anaheim, collaborating with Siemens and Thyssen-Krupp. He was also technical lead for the magnetic design of the Electromagnetic Aircraft Launch System (EMALS), which has become a multi-billion-dollar program.

1984 – 1998, General Dynamics (GD) and Lockheed-Martin: Prior to joining GA in 1998, Dr. Gurol was Chief Scientist for the Energy Programs Group at GD, which was acquired by Lockheed-Martin in 1996, in which capacity he was responsible for overseeing and providing solutions for challenging problems in superconducting magnet design.  As a program manager from 1988 to 1996, Dr. Gurol led GD’s development of superconducting propulsion magnets for the Navy’s Magnetohydrodynamic (MHD) Submarine program.  He also led the electromagnetic design activities for the SSC (Superconducting Super Collider) program, responsible for ensuring the magnetic field quality of the accelerator dipole magnets. He taught extension classes at University of California San Diego in superconducting magnet design. From 1984 to 1988, Dr. Gurol was lead electromagnetics analyst for superconducting magnet programs for fusion and isotope separation systems.

1982 – 1984, Science Applications International Corporation (SAIC): Senior scientist from 1982 to 1984, in which capacity he led work on the effects of irradiated first wall and blanket materials in advanced (DD and DHe3 fuel cycle) fusion reactors.

1976 – 1982, University of California Santa Barbara (UCSB): Assistant Professor in the Department of Chemical and Nuclear Engineering, responsible for research and teaching in nuclear reactor theory.