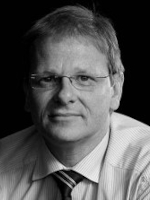 He is a specialist for electrical propulsion technology, linear drives and railway power supply systems and has a long-term experience with Railway and MAGLEV high speed technology.