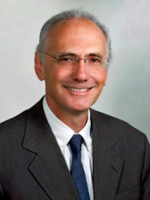 Prof. Dr. Richard Stephan is a full professor at the National University of Rio de Janeiro.

He is an elected member of the International Maglev Steering Committee (ISC).

He has an MBA degree (2005) from the Center for Scientific Enterprise, London (CSEL), on the Technology Enterprise Development.

During 1977, he worked as an engineer at Furnas Centrais Elétricas, Rio de Janeiro. Since 1978, he has been with the Department of Electrical Engineering, UFRJ. He spent a sabbatical leave at CEPEL, the Research Center of ELETROBRAS in 1993. His main interests are in the fields of applications of superconductivity, control of electrical drives and power electronics.

Prof. Dr. Stephan is the chairman of the Brazilian Power Electronics Society (SOBRAEP).