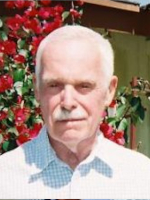 Dr. Harding has a Ph.D. in physics from Caltech and an M.A. in economics from U.C. Berkeley. He retired from Government service and was doing transportation/maglev consulting in Palm Springs, California.

Dr. Harding was a physicist with over 45 years of maglev experience, having directed an experimental program at the Jet Propulsion Laboratory on a superconducting gyroscope in the early 60's. He was hired by FRA's Office of High Speed Ground Transportation to direct development of a U.S. maglev system.