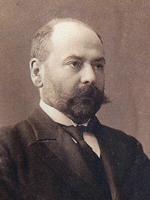 Boris Petrovich Weinberg was born in St. Petersburg province. From childhood he was interested in physics. He graduated from the Physics and Mathematics Faculty of St. Petersburg University in 1893. In 1909 he moved to Tomsk, headed the Department of Physics at the Tomsk Institute of Technology (1909-1924). In 1913 the experimental model of a vacuum train was created. One year later he gave a lecture in St. Petersburg in which he proposed a vacuum transport project that makes use of magnetic suspension technolgies. 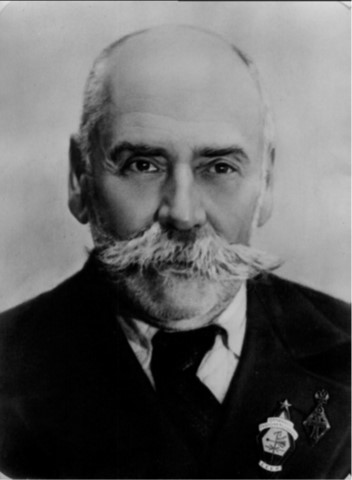 Boris Petrovich Weinberg died in World War II in the besieged city of Leningrad from hunger. He is buried in a communal grave, the exact burial location is unknown.

"The university in the city of Tomsk was the first university established in the Russian Empire in the territory of Siberia. In 1909, an employee of the St. Petersburg University Boris Petrovich Weinberg was invited to the Tomsk University as a professor of physics. B.P. Weinberg distinguished the breadth of scientific interests - he dealt with issues of terrestrial magnetism, ice properties, solid state physics and problems of using solar energy. One of the first works of Professor Weinberg at Tomsk University was the creation of an experimental installation for electromagnetic transport.

In 1911, Weinberg builds an installation with a 10-kilogram iron carriage moving along a 20-meter ring road from a copper pipe 32 centimeters in diameter. In order to get rid of aerodynamic drag, the air from the pipe was pumped out and the movement of the carriage was in a vacuum. Movement along the pipe the carriage began, receiving a push from the system of solenoids. To get rid of the friction on the rails, the carriage was suspended in space using a system of solenoids placed on top of the copper pipe, which in turns attracted the carriage. An important part of the installation was the switch system, which enabled the current to be turned on in the next solenoid, when the nose of the carriage approached this solenoid, and turned off the current when the carriage stern passed past the solenoid. Thus, the carriage was transferred from one solenoid to another.

Two years later, the installation was successfully completed - it was possible to organize the operation of switches so that the carriage flew inside the pipe without touching the walls and reached a speed of 6 km per hour.

In his work "Motion without friction," published in 1914, Professor Weinberg described the successful experiments with this vacuum magneto-levitation unit and proposed a draft route for passenger traffic at a speed of 800-1000 km per hour. The route was an evacuated pipe, along which the carriage moved, representing a cigarshaped steel cylinder with a diameter of 0.9 meters and a length of 2.5 meters, in which the passenger (in a lying position) and a supply of oxygen for breathing were placed. At each station, the carriage was accelerated or braked by linear induction solenoids of about 3 km in length, which, according to Weinberg, would led to the carriage speeds of about 800 km per hour. The World War, which began in 1914, interrupted work on this installation. Professor Weinberg was sent to the United States as a military representative for the acceptance of artillery shells for Russian army. During his stay in the USA, Weinberg published the results of his studies in American journals in the article "500 miles per hour", which aroused great interest among American engineers".

In his book "Motion without Friction," Weinberg explained the concept of the Vacuum Tube Train. Evacuation of the tubes results in minimal air friction, while levitation of the train eliminates any friction with the tube. In his design, a hermetically sealed capsule (a cigar-shaped cylinder about 2.5 m long and 0.9 m high) inside the tube was to be accelerated at the departure station by a solenoid, which in this case plays the role of an electromagnetic gun, and decelerated at the destination station by a solenoid.  It was designed to carry only one passenger, who had to lie inside. Inside the capsule should be installed an apparatus that absorbs carbon dioxide, a supply of oxygen for breathing and electric lighting.
Source: With kind permission of Mikahil Volkov [2018], Presentation at the Maglev2018 Conference. 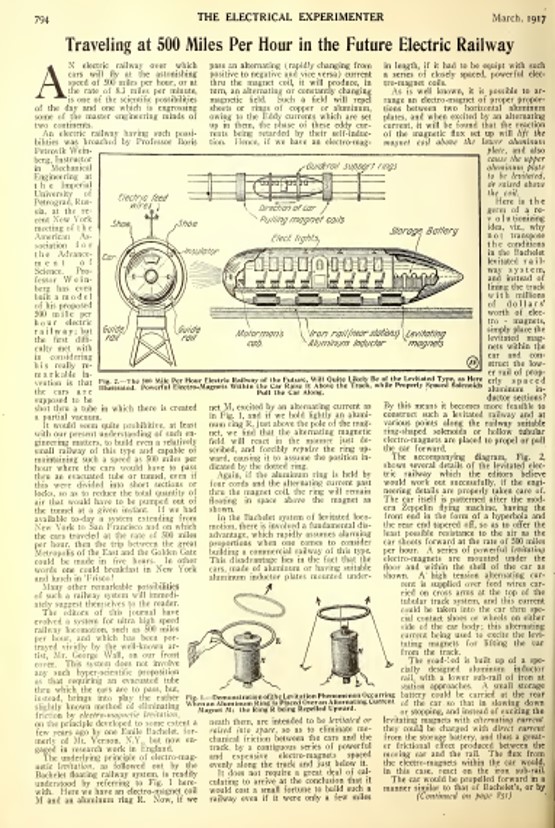 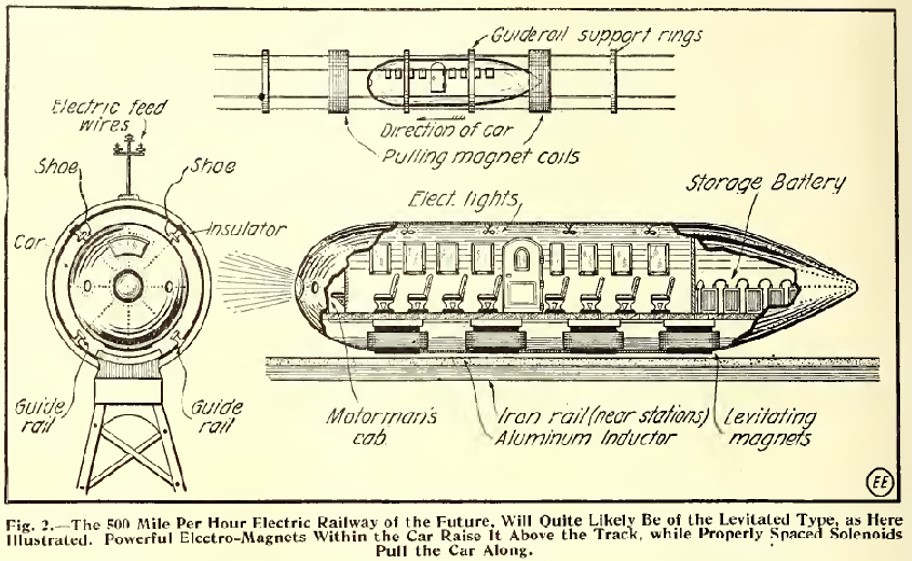 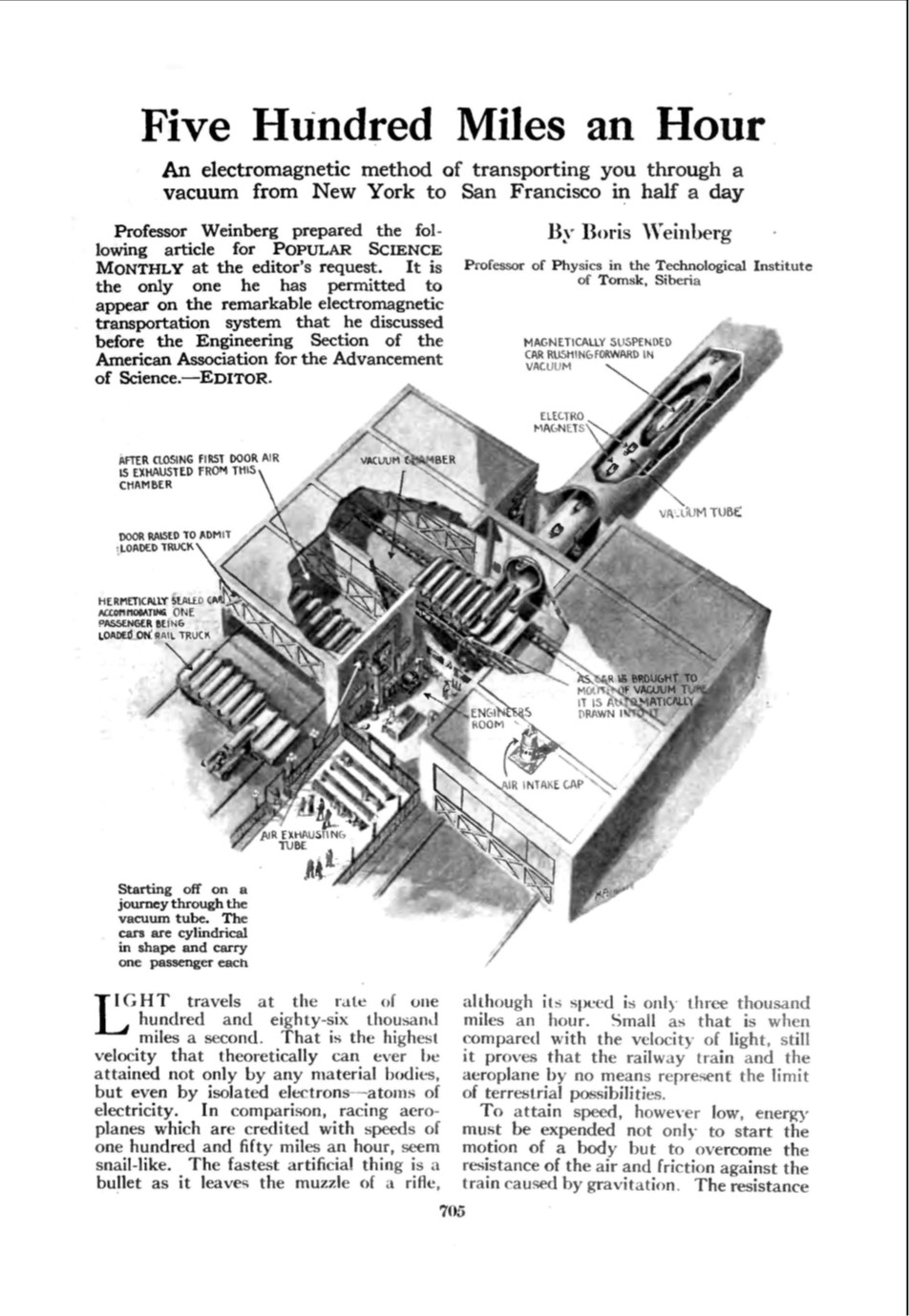 Weinberg, Boris [1919]: "Traveling at 500 Miles an Hour". In: Popular Science Monthly, p. 705. Quote: "An electromagnetic method of transporting you through a vacuum from New York to San Francisco in half a day". Source: With kind permission of Mikahil Volkov [2018], presentation at the Maglev2018 Conference.