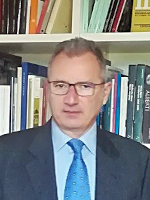 Prof. Gino D’Ovidio is a professor of Transportation Engineering at the University of L’Aquila (Italy).

Prof. D’Ovidio has a long-time experience with transport planning and he has participated as a scientific consultant to several committees of transport sector.

He received the civil engineering degree from the University of L’Aquila in 1991.
His scientific activities have concerned mainly non-conventional magnetic levitation transport, technological innovations in mass transportation field and systems, and methods for integrated design of sustainable urban mobility.

He also conducts research activities related to the system design of hybrid electric urban train hydrogen powered with no emission energy cycle. He has been the scientific coordinators of the "Transportation" sector of the Science and Technology Park of Abruzzo region (Italy).

He has contributed to the realization of the "Transport and Infrastructures" laboratory at the University of L’Aquila, which he actually leads. He has worked for a long time and with great deal at the design and the realization of experimental laboratory structures for the design and construction of propulsion systems and magnetic levitation devices based on the use of high temperature superconductor materials.

D’Ovidio’s most significant scientific result is the design and technological realization of UAQ4 (University of L'Aquila, model 4), a maglev train the suspension and propulsion devices of which are based on superconducting magnetic levitation technology and stepper direct current linear motor, respectively. The main system components are successfully laboratory tested and patented.