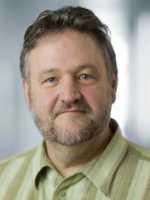 Prof. Dr.-Ing. Prof. E.h. Peter Eberhard is a full professor at the University of Stuttgart, Germany.

He serves as head of the Institute of Engineering and Computational Mechanics.