Many engineers, inventors and laymen have contributed to the invention and development of the maglev system.

Boris Petrovich Weinberg was born in St. Petersburg province. From childhood he was interested in physics. He graduated from the Physics and Mathematics Faculty of St. Petersburg University in 1893.

In 1909 he moved to Tomsk, headed the Department of Physics at the Tomsk Institute of Technology (1909-1924). In 1913 the experimental model of a vacuum train was created. One year later he gabe a lecture in St. Petersburg in which he proposed a vacuum transport project that makes use of magnetic suspension technolgies.

Boris Petrovich Weinberg died in World War II in the besieged city of Leningrad from hunger. He is buried in a communal grave, the exact burial location is unknown. 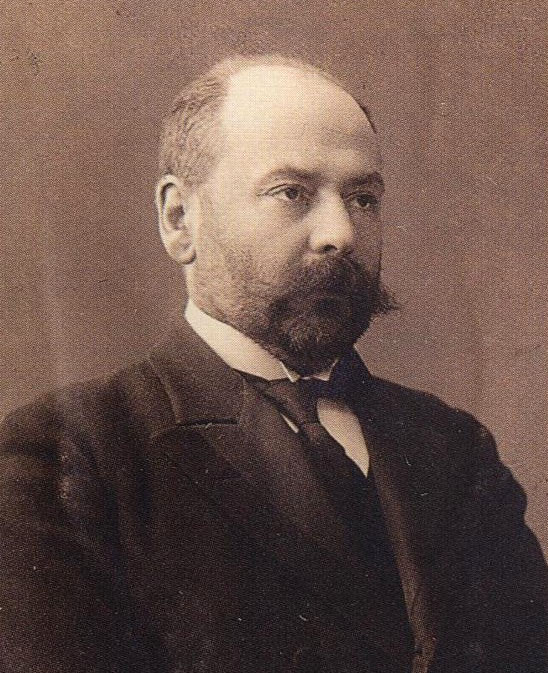 "The university in the city of Tomsk was the first university established in the Russian Empire in the territory of Siberia. In 1909, an employee of the St. Petersburg University Boris Petrovich Weinberg was invited to the Tomsk University as a professor of physics. B.P. Weinberg distinguished the breadth of scientific interests - he dealt with issues of terrestrial magnetism, ice properties, solid state physics and problems of using solar energy. One of the first works of Professor Weinberg at Tomsk University was the creation of an experimental installation for electromagnetic transport.

In 1911, Weinberg builds an installation with a 10-kilogram iron carriage moving along a 20-meter ring road from a copper pipe 32 centimeters in diameter. In order to get rid of aerodynamic drag, the air from the pipe was pumped out and the movement of the carriage was in a vacuum. Movement along the pipe the carriage began, receiving a push from the system of solenoids. To get rid of the friction on the rails, the carriage was suspended in space using a system of solenoids placed on top of the copper pipe, which in turns attracted the carriage. An important part of the installation was the switch system, which enabled the current to be turned on in the next solenoid, when the nose of the carriage approached this solenoid, and turned off the current when the carriage stern passed past the solenoid. Thus, the carriage was transferred from one solenoid to another.

Two years later, the installation was successfully completed - it was possible to organize the operation of switches so that the carriage flew inside the pipe without touching the walls and reached a speed of 6 km per hour.

In his work "Motion without friction," published in 1914, Professor Weinberg described the successful experiments with this vacuum magneto-levitation unit and proposed a draft route for passenger traffic at a speed of 800-1000 km per hour. The route was an evacuated pipe, along which the carriage moved, representing a cigarshaped steel cylinder with a diameter of 0.9 meters and a length of 2.5 meters, in which the passenger (in a lying position) and a supply of oxygen for breathing were placed. At each station, the carriage was accelerated or braked by linear induction solenoids of about 3 km in length, which, according to Weinberg, would led to the carriage speeds of about 800 km per hour. The World War, which began in 1914, interrupted work on this installation. Professor Weinberg was sent to the United States as a military representative for the acceptance of artillery shells for Russian army. During his stay in the USA, Weinberg published the results of his studies in American journals in the article "500 miles per hour", which aroused great interest among American engineers".

In 1914, the French-born American inventor Emile Bachelet presented his idea of a maglev vehicle and even displayed a first model. A report in the Swiss journal "Schwizer Familie" in the year 1914 shows a photograph of this event and provides some information about his project vision, as well as the model. 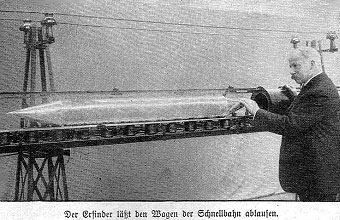 Emile Bachelet was born in France in 1863. He emigrated in the 1880s to the United States where he worked as an electrician. In this activity he discovered some therapeutic applications of electro-magnets to cure rheumatism and relieve arthritic pain.

After starting in the 1890s to commercially exploit related medical devices for which he was granted several patents, he began work on magnetic forces through electro-magnets. It is easy to understand what is involved by thinking of what can be done with natural magnets: when the north pole of a magnet faces the south pole of another magnet an attraction force is created; in reverse, a magnetic repulsion is obtained by opposing two north poles or two south poles. Electro-magnets, according to the intensity of the current and turning on and off at the desired frequency, allow the creation and control of a powerful magnetic force.

In March 1912, Bachelet obtained a patent for a “levitating transmitting apparatus” from the United States Patent Office (patent no. 1,020,942). The invention is described as a machine to transfer bodies at a very high speed from one point to another.

Although it was primarily meant for the transmission of mail and small packages by a carrier, it was easy to imagine its application at a larger scale in trains carrying freight or passengers. 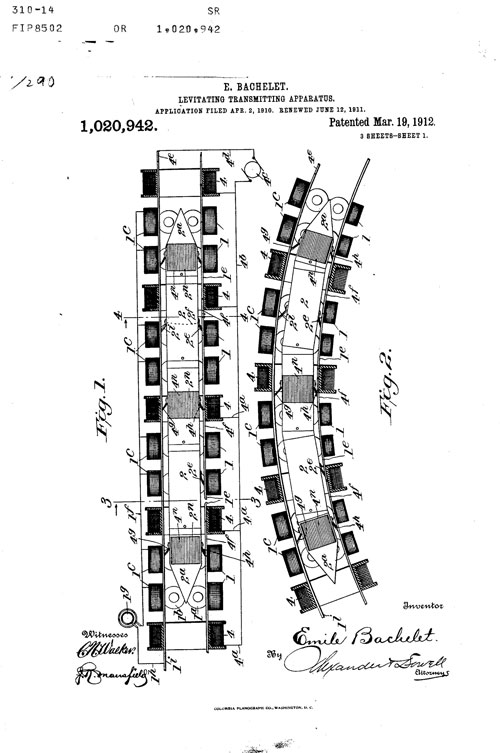 Too far ahead of his time?

Bachelet was quite successful as early as 1914 with a prototype in an exhibition in London and managed to attract financial support to continue his research until his death in 1946. This invention is one of the premier and fundamental predecessors of the technologies surrounding modern electromagnetically levitated trains (or so-called ‘Maglev’ trains for ‘magnetic levitation’).

Bachelet was probably too far ahead of his time. Although the patent described details such as how to savae electricity by activating the magnets just before the passage of the train and cut the current after it has passed, it should be recalled that, at that time, the development of electric locomotives functioning on a reliable and powerful source of electricity to propel real commercial freight or passenger trains that would later overcome steam locomotivs had not even begun. In addition, the system required, and still requires nowadays, the construction of a specific network. Nevertheless, Bachelet’s invention undoubtedly paved the way for modern maglev trains, like the Chinese Transrapid of Shanghai or the Japanese Linimo of Aichi.

Hermann Kemper (* April 5, 1892 Nortrup, Germany, in the district of Osnabrueck, † July 13, 1977) was a German engineer and is considered by many the inventor of the basic maglev concept. 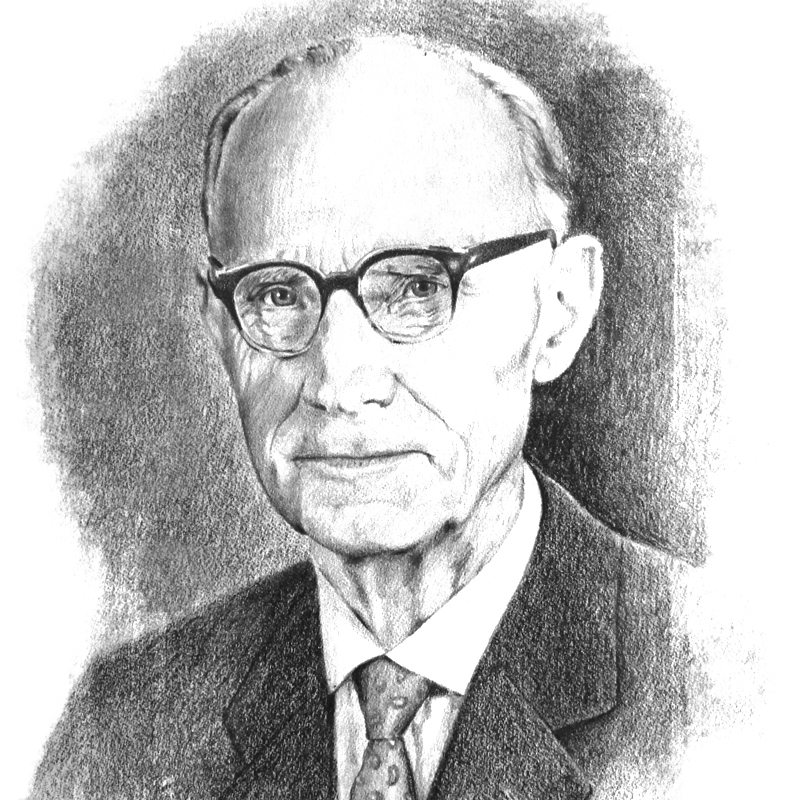 In 1922, Hermann Kemper began his research about magnetic levitation. It took him until 1933, when he succeeded in working out at technical concept for a floating vehicle, based on the principle of electromagnetic attraction. He applied for a patent, then at the “Reichspatentamt” in Berlin. He received it in 1934, under the patent number 643316. In the patent text, his invention was described as a “monorail vehicle with no wheels attached”, that is kept floating by means of magnetic fields.

Hermann Kemper’s invention laid the foundations for further technological progress in this field, which ultimately led to the development of the Transrapid system (Germany) and the Linear Motor Car (Japan) – two different technological approaches based on the same basic principle of attracting and repulsing magnetic fields.

For his scientific achievements Hermann Kemper was awarded the great Order of Merit of the Federal Republic of Germany, in 1972. 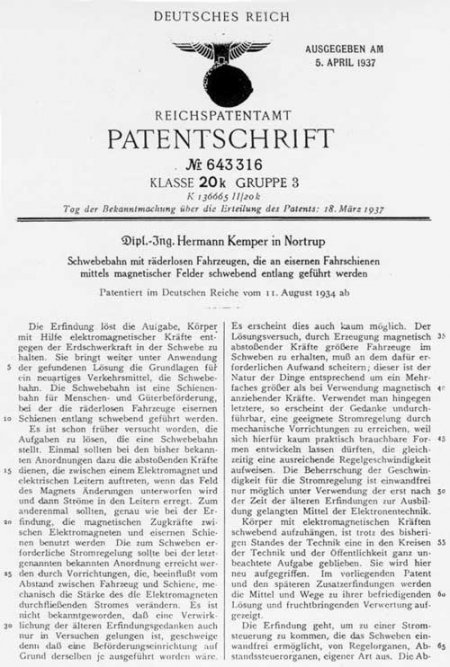